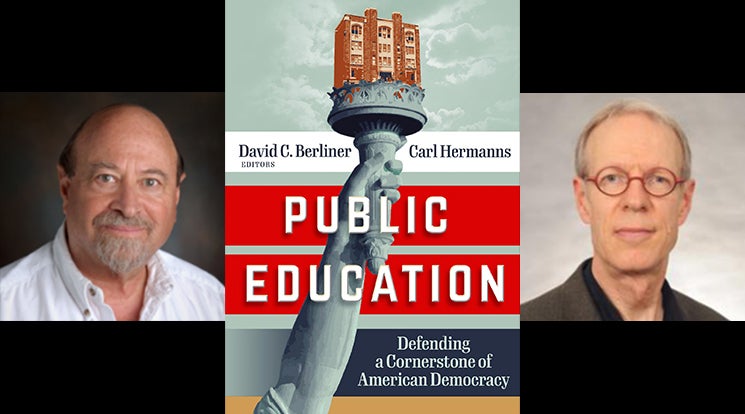 The collection of essays by education scholars and practitioners explores the vital role of public education in promoting and maintaining democratic ideals.

The book coincides with the centennial celebration of the Horace Mann League of the USA. Mann, a 19th-century American educator and advocate of education reform, maintained that public education meant “much more than an ability to read, write and keep common accounts.” For him, it was “the cornerstone of our community and our democracy." Mann, who grew up poor and without schooling, fought for free and inclusive public education. He was the first to secure public funds to support schools.

Some of the authors in the collection express concern about the quality of alternative schools and laws that funnel public funds to private, religious and charter schools. Others are deeply distressed by the gross inequities in per-pupil spending created by funding based on property taxes. Still other writers see hope on the horizon for the future of public schools.

We talked to Berliner and Hermanns about the power of public education to help sustain democracy, the problems with taxpayer-funded private schools and more.

Why do we need this book right now?

Berliner: About three years ago, we thought our democracy was in trouble. Former President Donald Trump was in office. People were supporting some of his clearly false statements. And after the January 6 insurrection, we saw a trend toward non-democratic ideas and activities. That validated our belief that this book was important. As educators, we believe in the power of public schools to promote democracy. We created a book of essays by people with something worth saying about the nexus between public education and our fragile democracy.

Hermanns: I’d add that, while one purpose of our public schools is to prepare students to contribute to the economic health of their communities and the country, the other essential purpose is to help kids attain the mindsets and skills to take their place as constructive participants in our pluralistic democracy. The troubling societal trends in our public discourse and in the functioning of our politics indicate that we need to do a better job in equipping young people to engage critically and effectively in the democratic life of our republic, if, to paraphrase Ben Franklin, we are to keep it. Our book describes how public schools are uniquely equipped to do that.

How did you select contributors for the book?

Berliner: We both know people we admire and ultimately wound up with almost 30 writers. Our instructions to them were clear — to address, in whatever ways you choose, (whether in a research-like paper, an essay or an opinion piece), the issues of democracy and public education.

How do you hope this book contributes to the national conversation about public education?

Berliner: Since Sputnik went up in 1957, America's emphasis in schooling turned from literature, civics, history and social studies to math, science and competition with Russia (and other nations) for scientific supremacy. It would be sad to achieve scientific supremacy and lose our democracy because of that single-minded purpose.

Civics, social studies and history have been cut back. English literature has evolved from the classics and discussions of democratic ideals, to more contemporary issues.There is less time to discuss books like “The Red Badge of Courage.” Mark Twain is not taught as much. Atticus Finch is less well known than in previous decades.

Our schools often forget they should prepare kids not only for employment, but also for democratic living. We wanted to emphasize that.

Hermanns: We hope it will engage a variety of readers, including school leaders, teachers and families, and challenge them to reimagine how public schools might continue to evolve and thrive, as they prepare students for productive and constructive citizenship.

How does the book address the proliferation of religious, private and home schools, and other alternatives to public education?

Berliner: Our writers are all committed to public schooling and are mildly or adamantly against schools such as charter schools that function more as publicly funded private schools and voucher schools. We see the danger for our democracy in publicly funding children to go to schools that are, through various means, selecting the children they want to teach while excluding others  such as special-ed kids, English-language learners and children living in poverty.

Hermanns: The proliferation of alternatives to public education works against one of the defining assets of genuine public education — the potential to bring children together from different walks of life to work, learn and play together, so they might learn to see their common humanity and appreciate each other as friends and colleagues rather than as someone who is “other.”

Berliner: It strikes us as un-American to use tax dollars for charter and voucher schools that say up front that they discriminate. Discriminatory practices are actually written into some of their admission policies. Genuine public schools take all children. For example, they take and support pregnant teenagers and LGBTQ students. They provide transportation for those who need it. They supply lunches for those who can't afford them. They are often voting places in their communities, and they don’t disappear in the first few years after they open.

Large percentages of voucher and charter schools close their doors frequently, often without notice, while genuine public schools often become stable centers for their community. They are not aliens to their communities, who just drop in to scoop up revenue-paying students.

Hermanns: That’s the main difference. Charter schools and other types of voucher schools that claim the mantle of being public schools eligible for public funding, but then function more as private schools, siphon funds from an already underfunded public education system and often function as a cover for a long-standing project in a number of states — including Arizona — to privatize public education.

What is the distinction between funneling public funds to alternative schools and public schools?

Berliner: This distinction is simple. Public schools and the finances that support them are open to public scrutiny. Private charter and voucher schools are businesses, often corporations. Only if legal charges are brought against them, can the public see their records. So public money can be used any way the directors of such schools want, with no public oversight.

Who makes this distinction?

Berliner: There is little debate about this. For almost 200 years a distinction has been made in the U.S. between the public schools and religious or private independent schools based on whether tax revenues are used for support. The basic rule is clear — public money should not be used to support religious or private schools. But if no one argues, sometimes such support happens.

Hermanns: And the distinction has been hard fought in the courts throughout history, culminating in a clear understanding that public funding should support schools that support the public generally and do not discriminate against any groups of students, as private schools can do, or elevate one religion or sectarian belief over others, as religious schools do.

Why does the distribution of public funds for schools matter?

Berliner: There is a slippery slope you don’t want to get on. Does the Baptist church want to support Catholic schools? Do Catholics want to support Muslim schools? Do poor Black families want to support an elite private school that never takes in their own kids? That’s what happened in the South after Brown v. Board of Education. White academies that excluded Black kids went up and were supported by public money. Majority rule was at play, and the minority was discriminated against.

Essayists in the book argue that publicly funded schools are obliged to honor American democracy. Many people with children in alternative schools agree, but they may disagree about how to do that. Your thoughts?

Berliner: We are a pluralistic country. We have to work it out. Take the morning Pledge of Allegiance frequently said in schools. After the clause “under God” got put in, it took awhile for the courts to rule that a kid who didn’t want to say that, didn’t have to. Holding a graduation in a church, so many relatives could attend, sounds great. But it infringes on the rights of some non-Christians and atheists. It had to stop. If E Pluribus Unum is to mean something, it must also recognize the rights of the “unum” not to be overrun by a majority of the “pluribus.”

Hermanns: I’d also suggest that if there is disagreement about the meaning of honoring American democracy, that we turn to our founding documents. The Declaration of Independence spells out a set of truths we hold to be “self-evident.” Our task is the work of realizing those truths in everyday structures, systems and cultures of our pluralistic democracy to attain the more perfect union described in the preamble of our Constitution. Have we realized a country where there is real justice for all, that promotes the general welfare, that understands and acts in ways that realize our common humanity — that all people are created equal — and endowed with the unalienable rights to life, liberty and the pursuit of happiness?

Berliner: Certainly more concentration on preparation for living in a democratic society.

And more reading — not short blurbs, as is common on phones, but literature, what kids often call “big” books.The world’s culture and history is in books — the achievements and folly of people, nations and empires; the glory of heroines and heroes — are in literature.

Learning one's own and other cultures is necessary preparation for a multi-cultural, multi-racial and multi-religious “smaller” world. Replacement theory must be replaced by understanding that we are a single species with various cultural preferences and habits that need to be honored. There are limits, such as when certain cultural practices or habits conflict with laws or standards of care. But mostly we need children raised to understand, respect, and value each other, honor their country and its democracy.

Hermanns: That’s a tough question, given all the uncertainties and contingencies that our world is facing.

Rather than speculate about what our education system might look like in 20 years, I’ll leave you with a quote that guides my thinking about this. It’s from Maxine Greene, “Releasing the Imagination: Essays on Education, the Arts, and Social Change.”

“We want our classrooms to be just and caring, full of various conceptions of the good. We want them to be articulate, with the dialogue involving as many persons as possible, opening to one another, opening to the world. And we want our children to be concerned for one another, as we learn to be concerned for them. We want them to achieve friendships among one another, as each one moves to a heightened sense of craft and wide-awakeness, to a renewed consciousness of worth and possibility.”