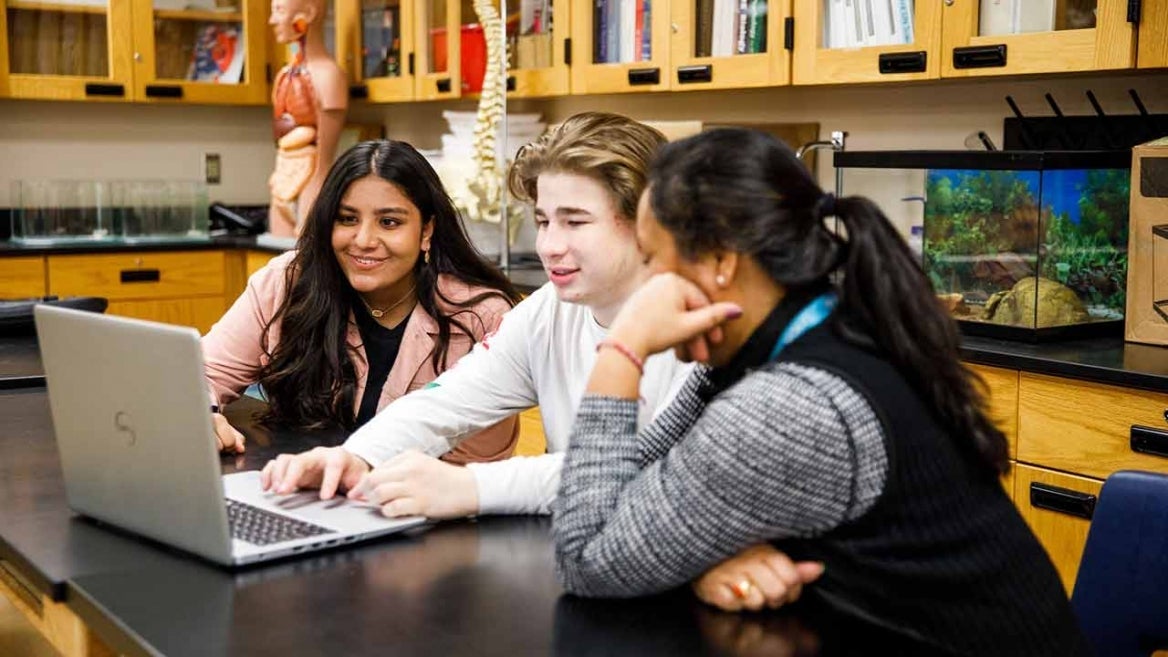 From rising bread and domesticated dogs to penicillin and rubber, humans have a long history of shaping our world through biotechnology — using biological systems and organisms to improve or create desired products.

Today’s hot science topics, such as genetically modified crops and new vaccine techniques, show that biotechnology also plays a large role in society’s present and future. That’s why it’s important to introduce this subject to the next generation of scientists and decision-makers.

A group of Arizona State University researchers and local Arizona teachers are developing a revolutionary virtual curriculum to do just that.

Abhishek Singharoy, an assistant professor in the School of Molecular Sciences and associate faculty in the Biodesign Center for Applied Structural Discovery, leads this project, called the BioSense Network. It recently received a $1.4 million National Defense Education Program grant from the U.S. Department of Defense (DOD). The grant will allow the group to develop lessons that use virtual simulations, train teachers to use these materials, and build an online platform that will bring the BioSense Network to diverse student populations throughout Arizona.

“With the molecular simulations, which is a big component of these e-modules, students get to approach learning about biology and biotechnology in a different way. They get to see things like proteins and viruses in three dimensions, move and measure and add things, and really engage with it,” says Cassandra Kellaris, the project’s coordinator and a technology strategist in the Mary Lou Fulton Teachers College.

Teaching how to teach

Singharoy’s work started as an after-school biophysics club with virtual learning components. After receiving a seed grant from the Flinn Foundation, he partnered with local high school teacher Rachna Nath, who ran the club with students from her school.

During this time, Singharoy developed his Visual Molecular Dynamics (VMD) program, which taps into ASU’s computing power to give students interactive simulations of molecular processes.

The club was a success, eventually spreading to three other local schools. This work is expanding into the BioSense Network, thanks to the DOD grant — along with ASU colleagues from the Teachers College and K–12 teachers like Nath, who contribute their expertise as educators to help Singharoy create useful, engaging curriculum.

“That’s where educators come in; they teach us how to teach,” Singharoy says. “That was really important.”

Science minds of the future

So why is the DOD, an agency devoted to protecting our nation’s security, interested in helping young minds learn about biotechnology?

“The Department (of Defense) is cultivating the future STEM workforce by providing unique education opportunities to students and educators of all ages and across all demographics throughout the country. These efforts are vitally important to maintaining our nation’s competitive advantage, ensuring we are prepared for the ever-changing global technology landscape,” says Robert Irie, acting director of Defense Research and Engineering for Research and Technology, in an online statement.

It’s important for a diverse array of students to start to see themselves in that field so that their voice can be represented in the future of biotechnology.

In Nath’s biotechnology classroom, students get to work on a variety of research projects, including ones that they choose on their own. Past projects have included developing a heat-monitoring wristband, using flavonoids in fruit peels to make bioplastics more degradable, and growing moss in simulated Martian soil.

“I love teaching this class because it gives me the opportunity to conduct research with my students to give them that critical thinking aspect that will push them further into future research,” Nath says.

“Students learn in different ways. Some of them are visual, some are kinesthetic, some are verbal,” she says. “Showing them that they can actually manipulate a molecule helps the students get out of their zone of one-directional instruction to something that they can do hands-on and is interactive. That’s always been successful for me.”

The BioSense Network aims to ensure that this learning is accessible to a broad range of communities and schools.

“It’s important for a diverse array of students to start to see themselves in that field so that their voice can be represented in the future of biotechnology,” Kellaris says. “They are the ones deciding why biotechnology is important and what are the biggest issues facing the communities they’re part of.”

Over the next three years, the BioSense Network team will develop six curriculum modules, as well as the technology platform to support the VMD software and training for teachers — all of which will come at zero cost to schools. Each module will have two versions: one for high school and one for middle school.

The lessons will cover many emerging technologies and science questions: the role of shapes in controlling biological functions; giving molecules chemical instructions; growing plants in low light with artificial photosynthesis; using a nanosensor to detect genetic material in surroundings; vaccine design; and gene editing with CRISPR-Cas9.

“We want this to be a tool that the teachers can implement in the way that is best for them and their students. We are giving them the time and space to think through how these tools will support what they are already doing,” Kellaris says.

“Being a biotechnology teacher and also having an idea of the state standards and the actual classroom requirements helps bring that perspective of what I truly want to teach the kids,” Nath adds.

Tara Nkrumah, an assistant research professor in the School of Social Transformation’s Center for Gender Equity in Science and Technology, also works with the team to make inclusivity a built-in feature of the lessons. The BioSense Network aims to encourage an interest in science among students whose communities are underrepresented in science, technology, engineering and math (STEM) fields.

The team plans to engage up to 15 secondary schools in Arizona. The modules could be used as part of a school’s regular science curriculum or as an after-school club; each teacher will decide the best way to use them.

The BioSense Network team is currently developing the first module’s content while training teachers on how to use the technology. At the end of the three-year grant period, Singharoy hopes the project’s success will attract additional funding so that the network can expand outside of Arizona and spread nationwide.

If you are a middle or high school science teacher in Arizona interested in participating in the BioSense Network project, contact Cassandra Kellaris at cassandra.kellaris@asu.edu.

To apply for the DOD grant, Singharoy worked with ASU’s Global Security Initiative, which has longstanding relationships with the security and defense communities.

The initiative offers a strategic advantage to ASU researchers who want to apply for DOD research or education grants: its dedicated proposal team is familiar with the DOD’s unique application processes and understands how to frame ideas that will appeal to the agency. While the DOD is its specialty, the Global Security Initative can also help ASU researchers apply to grants from other federal agencies.

“The team works with you towards making sure that your milestones are met, so the principal investigator can focus on their part,” Singharoy says. “They essentially guide us through the entire process.”

If you are an ASU researcher interested in working with the Global Security Initiative on your federal grant proposal, contact GSI at GSIpreaward@asu.edu.

The BioSense Network project is funded by the U.S. Department of Defense.

The Biodesign Institute and the Global Security Initiative are partially supported by Arizona’s Technology and Research Initiative Fund. TRIF investment has enabled hands-on training for tens of thousands of students across Arizona’s universities, thousands of scientific discoveries and patented technologies, and hundreds of new startup companies. Publicly supported through voter approval, TRIF is an essential resource for growing Arizona’s economy and providing opportunities for Arizona residents to work, learn and thrive.

Top photo: High school teacher Rachna Nath and her students worked on an early stage of this research, which started as an after-school biophysics club with virtual learning components. Photo by Andy DeLisle